The Kerry Blue is one of the larger AKC-recognized terrier breeds. This Irish terrier was born and bred to work, and these dogs have the typical terrier tenacity—which makes them effective hunters but sometimes challenging canine companions.

Born an inky black color, the soft and wavy coat of the Kerry Blue is considered to be ‘progressive gray.’ This means that by the age of 18 months the coat will gradually lighten, reaching a shade of gray ranging from a dark slate to a light blue-gray. In between, the coat may change color several times, including developing patches of brown fur that eventually fade into a uniformly gray coat.

Short coat that is soft and wavy with no undercoat

Blue-gray in color upon maturing

Characteristics of the Kerry Blue Terrier

History of the Kerry Blue Terrier

The history of the Kerry Blue is mostly uncertain—for all practical purposes, it seems as if the dog just appeared on the coast of southwest Ireland at least 150 years ago. Plenty of tales abound as to how the breed may have come to be, including accounts of a shipwrecked dog with a blue coat swimming ashore.

The truth is that no one knows how this type of dog was developed, but the sturdy breed quickly became part of life in Kerry County, Ireland. The dogs became such a fixture in the community, that it was natural for the breed to bear the name ‘Kerry’ in recognition from the county it originated.

Farmers relied on the Kerry Blue as an all-around working dog. They were often used to herd sheep and cattle, along with hunting mice, rats, and rabbits on the property. There’s also reason to believe in the early days of the breed’s history, peasants used these terriers to hunt small game on the property of nobility—who used much larger Irish Wolfhounds to guard their land.

Some have suggested that the Kerry Blue was bred from other terriers including the Bedlington terrier, Soft-Coated Wheaten terrier, or Irish terrier. Irish Wolfhounds may have played a role in the breed’s development also.

By the early 1900’s, however, the breed type was well defined and the dogs were beginning to make their presence known in the show rings of Ireland and England. Increased attention for the compact Irish Blue Terrier (as the breed was originally referred to) led to the breed’s expansion into new places beyond its Kerry county home.

As the 1920’s began, Kerry Blue terriers were brought to North America as pets and show dogs. The unique character and appearance of the dogs no doubt contributed to the breed becoming firmly established in the United States, and it was only a short time later that the Kerry Blue terrier gained AKC recognition in the year 1922.

When properly trained and socialized, the Kerry Blue is loyal, obedient, and athletic. These dogs are highly alert and can make a good watchdog. They also are a sturdy play companion for older children but may not be as well-suited for a home with young children.

Wondering how friendly a Kerry Blue will be with other pets and animals? Keep in mind that these feisty terriers were bred to hunt small vermin like mice and rabbits—so their prey drive tends to be strong. They aren’t typically recommended for homes with cats or other small animals, however early socialization and training can offset this natural tendency.

When it comes to other dogs, you should know that some Kerry Blues have a tendency to be dog-aggressive. The tough-dog attitude that makes these terriers so unrelenting also means that they generally don’t back down from confrontations with other dogs.

This doesn’t mean that a Kerry Blue will never co-exist happily in a multi-dog family or enjoy a friendly romp through the dog park. But owners do need to be educated on this breed’s tendencies and provide the right training and leadership to help these dog’s understand proper and safe behavior.

The terrier inside the Kerry Blue means that these dogs have a natural tendency to do things their own way. It’s very important that you establish clear pack leadership from puppyhood and don’t become half-hearted in your training. The active mind of the Kerry Blue needs consistent and engaging challenges. Trainers recommend that you keep sessions interesting and positive to engage both the mind and heart of this intelligent breed.

Exercise is key to the health and happiness of these dogs. They make excellent jogging companions and they can go the distance, despite their relatively compact size. At the very least, you should expect to take your Kerry Blue on several long walks a day. They also benefit from having a yard, but can be prone to digging so you’ll have to keep a close eye on that behavior.

If you’re looking for a sporty canine that excels in competition, this dog breed makes a great choice. They’re eager to please and have plenty of energy to channel into dog sports, such as agility competitions. Obedience-work will also put the mind and heart of the Kerry Blue to work.

Grooming the Kerry Blue’s soft, wavy coat can’t be dismissed. The fine hair easily becomes matted and is prone to collecting sticks, burrs, and other debris. Plan to brush your Kerry at least every other day, though many breed experts advise a daily brushing session. On the plus side, the Kerry’s coat is non-shedding and is more tolerable for many people that suffer from dog allergies.

You also will need to have this breed professionally groomed on a regular basis. The coat grows continuously, so a trip to the groomer will keep this terrier looking trim and tidy. Typically, every six weeks is enough to keep the terrier’s coat in check.

The thick shoot of hair covering the Kerry Blue’s face and eyes is called a ‘fall.’ It can be trimmed or groomed to tame its appearance. Originally intended to protect the dog’s eyes from the vermin it hunted, the fall is a characteristic part of the breed’s appearance but isn’t a functional requirement for the average pet.

The Kerry Blue is a relatively hearty breed but does have several health problems you should be alert to. The National Breed Club recommends hip and eye evaluations and many breeders also perform DNA testing to screen for hereditary health problems.

Some conditions that may affect Kerry Blue terriers include:

The Kerry Blue terrier has dietary requirements similar to any other dog—feed a high-quality, well-balanced diet to maintain your dog’s health and weight. Like many other breeds, some Kerry Blues suffer from allergies, so be sure to choose a formula that is free of fillers and features a quality source of animal protein.

What dog breeds shed the least 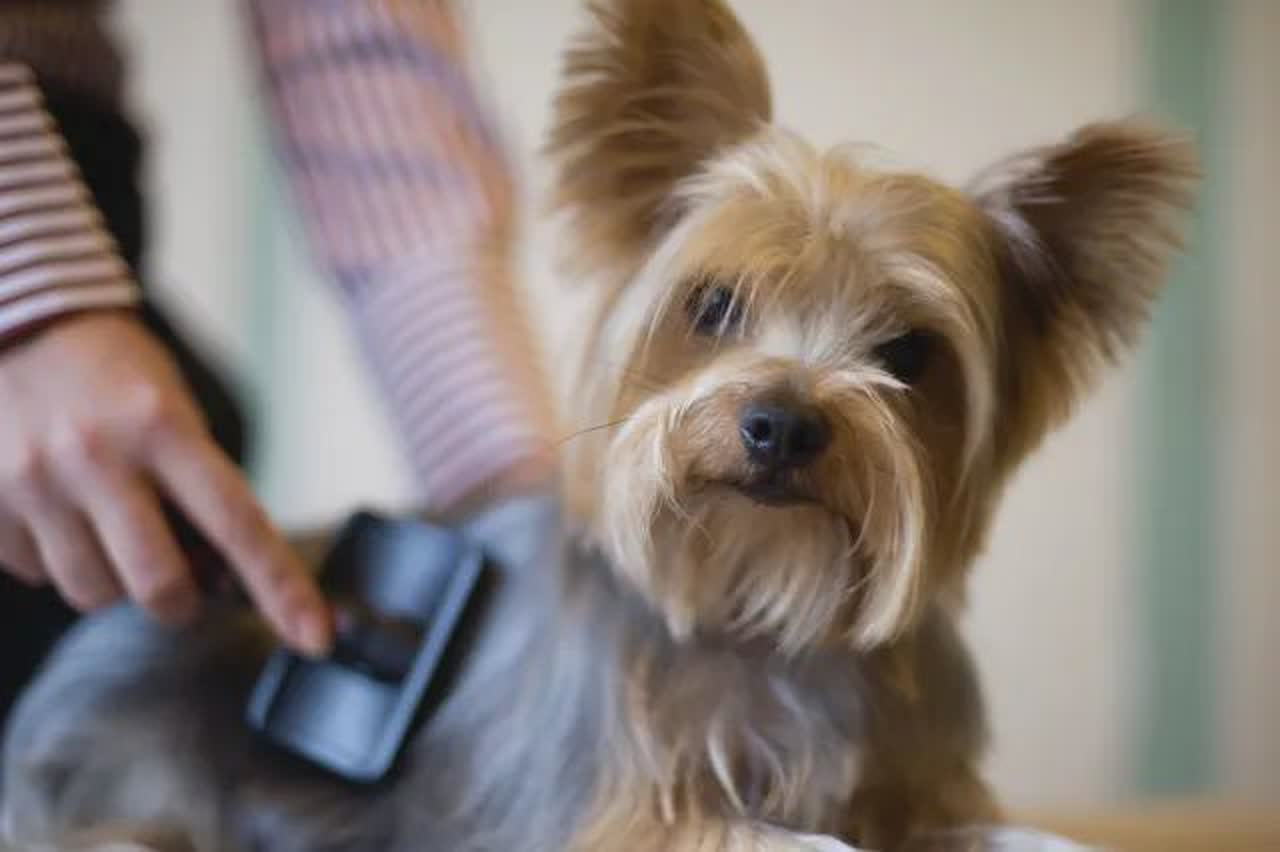 Where to Adopt or Buy a Kerry Blue Terrier

Kerry Blue terriers enjoy a loyal and devoted community in the United States. If you’re looking for a breeder, it’s normal to be put on a waiting list but there are generally puppies available throughout the year. The breeder should be able to answer any questions you have regarding the pedigree, health, and history of the litter and its parents. Ideally, you should meet one or both parents to have a better idea of your future pet’s personality, size, and temperament.

Since Kerry's have significant training and exercise needs, these dogs sometimes find themselves in need of a new home. If you’re looking for a Kerry Blue, consider checking with local or regional rescue groups—your new best friend might be waiting for you there!

A Kerry Blue is a one-of-a-kind dog that makes a loyal and faithful companion for years to come. There’s much to learn about Ireland’s hearty terrier and even more to experience when you make a Kerry Blue part of your family. Learn more about this breed by doing diligent research and speak with other Kerry owners to gain a better understanding of this dog’s personality and needs.

Other breeds to check out: