The Leonberger, or Leo, is a giant dog with a hard-working spirit and a gentle disposition that hails from the city in Germany after which it was named. Although the breed almost went extinct in World War I, it was saved—and thankfully so, as the breed is intelligent, noble, and very loyal. Leonbergers make excellent working dogs but are also calm and affectionate companions. Mature males develop a pronounced lion-like mane, adding to their distinguished appearance.

Characteristics of the Leonberger

History of the Leonberger

The Leonberger dog breed originates from Leonberg, Germany. During the mid-1800s, a gentleman named Heinrich Essig claimed to have bred a Landseer Newfoundland and a St. Bernard multiple times and later crossed the offspring with a Pyrenean Mountain Dog. Over the years, it is now believed that other dog breeds were crossed with early Leonbergers; however, no written records remain. The dog's appearance was bred to resemble a lion on the coat-of-arms of Leonberg. The breed became popular in the royal and imperial households of France, Austria-Hungary, Germany, and Italy.

The first Leonberger clubs were established by owners of the breed in 1891. They were popular farm dogs and used to pull carts. They were used to pull ammunition carts in both World Wars. The breed nearly became extinct during World War I but was saved by a group of enthusiasts.

The Leonberger first appeared in the U.S. and Canada in the early 1900s. They were imported by the Canadian government to perform as water rescue dogs. The breed faded in the U.S. during the Great Depression. Over the years, the numbers of Leonbergers increased in Europe and, later, in the U.S. The Leonberger Club of America was formed in 1987, but the breed was not officially admitted to the AKC working group until 2009.

The Leonberger can be a drooler, so many owners will keep a slobber cloth handy. This breed sheds moderately but more so in spring and fall. Leos need routine grooming, specifically hair-brushing once or twice a week. They typically do not have any coat trimming or sculpting. Leos tolerate cold weather well, but due to their double coats, they can get overheated in hot weather. It is good to provide a cool place for a Leo in hot weather and to limit exercise to cooler parts of the day.

Leonbergers have a strong drive to work and protect. They need daily exercise to keep them fit and happy. In addition, Leos will benefit from some type of job, such as guarding the home or obedience competition. In general, these are usually very calm, loyal, and loving companions. Leos are also highly intelligent dogs that respond very well to training. In fact, training and socialization are both essential for this breed.

The Leonberger is an affectionate and gentle dog breed that makes a delightful companion. This breed tends to be very intuitive about human emotions and forms a strong bond with its family. Typically, this breed gets along very well with children. These versatile dogs have a natural instinct to protect and assist people, making them wonderful service dogs and family pets.

Responsible breeders strive to maintain the highest breed standards as established by kennel clubs like the American Kennel Club (AKC). Dogs bred by these standards are less likely to inherit health conditions. However, some hereditary health problems can occur in the breed. Be aware of these conditions:

It is wise to give Leonbergers breed-specific formulas that meet their needs as a large breed. Leonberger puppies can be fed several times per day and grow to more than 100 pounds by their first birthday. A large breed diet will limit fat and protein so they do not grow too rapidly. Always provide continuous access to fresh drinking water.

Adult Leonbergers should be fed twice a day to help prevent bloating and GVD. They should not be given a large meal once a day. You can also minimize the risk of stomach torsion by providing an elevated feeding and watering arrangement so your dog can eat and drink while standing up. If your dog is prone to gulping its food, look for a feeding bowl that limits the amount of food that can be eaten at one time. You should also avoid vigorous exercise for an hour after a meal.

Leonbergers have a high potential for weight gain. You can minimize this by feeding for a specific amount of time, such as 10 to 15 minutes, and remove any uneaten food, rather than allowing free-feeding. 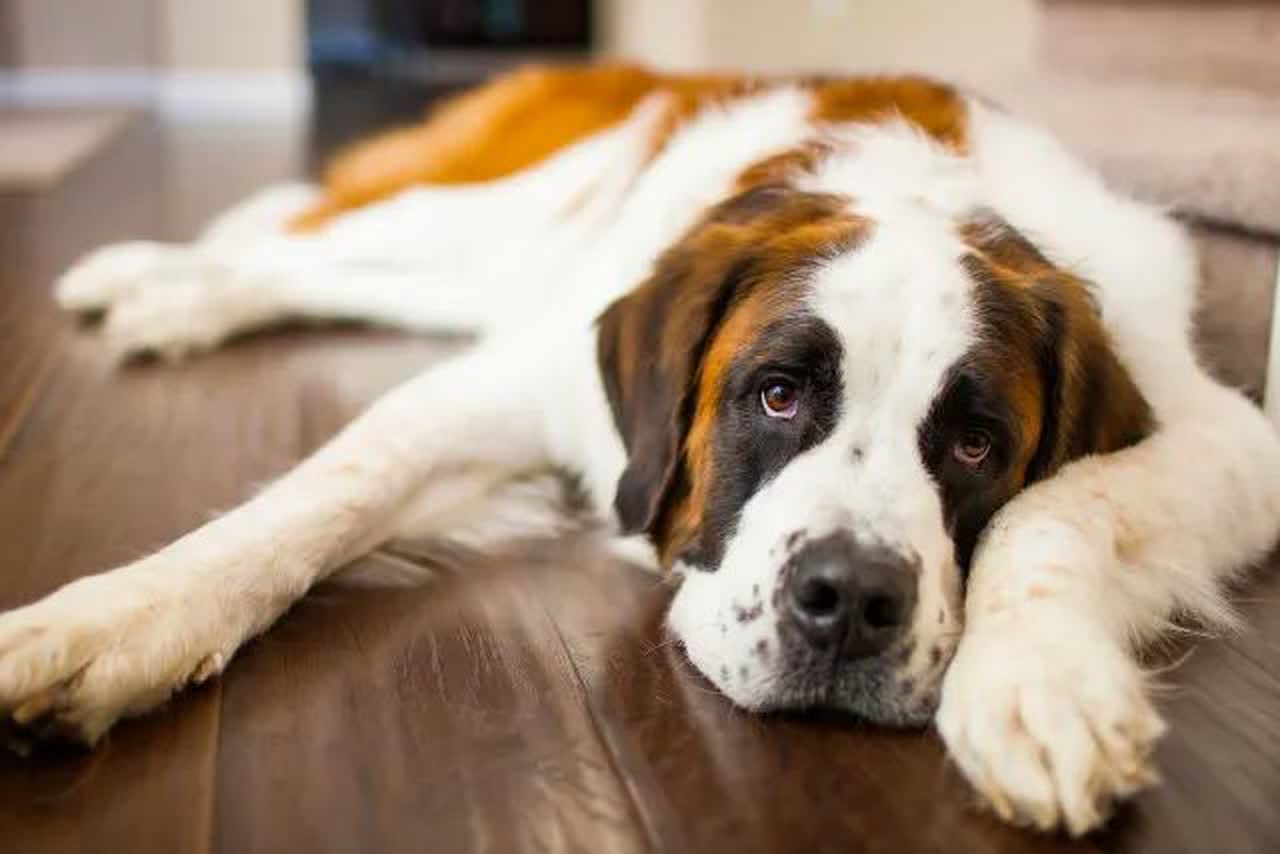 Pros and Cons of the Leonberger

Where to Adopt or Buy a Leonberger

While you might find a Leonberger at a local animal shelter, it's more likely that you will find the perfect dog for you from a Leonberger rescue group, such as the Leonberger Rescue Pals, which is dedicated to rescuing and rehoming unwanted, abandoned, or abused Leonberger and Leonberger mixes. Gentle Giants Rescue and Adoptions also works to find homes for this breed. The Leonberger Club of America also provides a list of breeders on its website.

Before you decide whether a Leonberger is the right dog for you, take the time to do thorough research. Find other owners and talk to reputable breeders. You may want to contact the Leonberger Club of America. Similar dog breeds to research include: